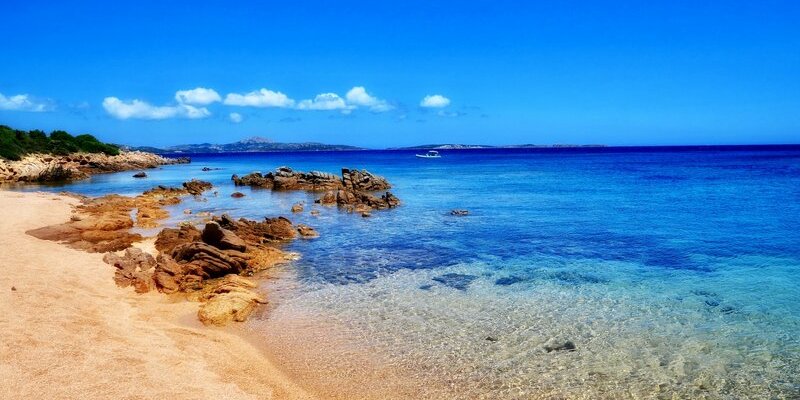 Porto Cervo is the centre of active daily life on the Costa Smeralda (Emerald Coast) and it’s easily the best place for shopping. Departing from here, you can relax on board while you cruise the coastline in the morning and then golf enthusiasts can head to the 18-hole Pevero golf course. Those anxious to rub shoulders with fellow ‘glamourati’ can find live music at numerous outdoor beach clubs like Phi Beach at Baia Sardinia, or can dine and dance at the famous Billionaire restaurant, a 10-minute drive from Porto Cervo.

Porto Rotondo, the resort village just south of Porto Cervo is best known for its private beaches. Here small bijou beaches are typical of this stretch of coast, which is characterized by numerous tiny coves good for walking or admiring from the deck. Porto Rotondo is much more laid back than the more up-market Porto Cervo and for those who prefer to be unrecognized this may be just the right place.

Cruising southeast, you’ll reach Cala di Luna, which is so beautiful it looks almost unreal. While the yacht is anchored offshore, you can relax and enjoy scenic views of limestone cliffs covered by blooming oleanders. In the early morning the sun rises from the sea just in front of the beach and its rays penetrate deep into the large caves that open onto the narrow shoreline. Nearby Cala Goloritzè is a ‘show- stopper’ with its fantasy of eroded rocks that tower sculpture-like over clear waters. You can immerse yourself in nature and explore this wild coastline.

Cagliari, in the south of the island, has been Sardinia’s capital since at least Roman times and still its biggest town. It’s ugly in parts and sprawling but the ‘old town’ known as Il Castello is a charming hilly labyrinth of sandy-coloured medieval buildings in various states of disrepair. This port city was founded in the seventh century BC by the Phoenicians.There’s no better way to see Cagliari than from the sailor’s vantage point, by approaching the city from the sea. Between the modern harbour and castle lies Cagliari’s marina in the old harbour district.

The coastline from the island’s most southern point to midway up the west coast is scattered with coves and small villages. Cruising this stretch, you will pass the island of Sant’ Antioco, the largest of the smaller Sardinian islands connected to the motherland by an artificial isthmus, and San Pietro-Punto di Cala Fico – here the seas are deep, the cliffs high and the countryside wild and rugged.

In the northwest of Sardinia, the city of Alghero is a historic town with a rich past and a cityscape that reflects the area’s early days. The predominant flavour here is Catalan, owing to wholesale Hispanicization. The traces are still strong in the old town with its flamboyant churches, wrought-iron balconies and narrow cobbled streets named in both Italian and Catalan. Guests can stroll along the old fort’s walkways overlooking the sea. The most impressive part of this historic town is the Grotta di Nettuno with fantastical stalagmites and stalactites. The vineyards here are also worth a visit. Wine tasting and dinner out on the town could be an option.

La Maddalena island on Sardinia’s northern tip offers a large variety of sandy and rocky beaches. The Archipelago of Maddalena is a natural oasis, surrounded by a warm, transparent sea. It was declared a National Park in 1996. La Maddalena is the only inhabited island in the archipelago, which also includes six others: Spargi, Razzoli, Budelli, Santa Maria, Capera and Santo Stefano.